Lewis and Tolkien: A Contrast of Similarities 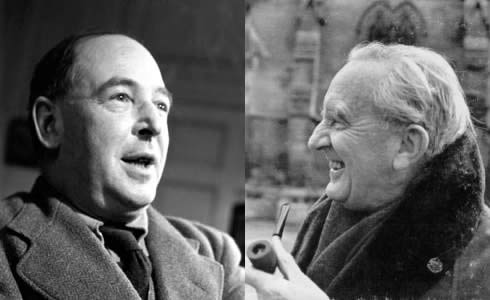 The writings of C.S. Lewis and J.R.R. Tolkien have often been studied and compared, quite possibly because of the friendship the authors shared.

The friendship between Lewis and Tolkien began when they were both Oxford dons.  Tolkien began a club among the literary faculty to read and study Icelandic and Norse literature.  After about three years in their literary society, the men discovered a mutual love for Norse mythology.

Lewis was an inspiration to Tolkien in his writings, being possibly one of the first to read his works.  Tolkien, in turn, played a large part in Lewis’s acceptance of Christianity, Lewis having been an atheist since his childhood.

Tolkien eventually shared the beginnings of what was to become The Silmarillion with Lewis and the differences between the two men’s approaches to writing quickly became apparent, though their love for similar ideas was also clear.

It is for both their similarities and their differences, which in many ways made them similar, that they men are often compared and judged against one another.

Both men are believed to have anti-feminist tendencies, neither author believed that their works were absolute allegories and both men argued that “fairy-stories” were an important and legitimate genre.

Both Lewis and Tolkien have been associated with anti-feminism and the works and lives of each is a source of continued debate concerning this matter.

Lewis’s criticism from the feminist view point focuses more on his behavior towards the women in his life.  Tales have been told of Lewis hiding from women who have come to see him on campus and even of him being shy or rude with female coworkers, though these tales have also been argued.  This anti-feminist idea of each man is perpetuated by the male-exclusive “club” each was a member of; the literary group the Inklings.

Lewis was quoted by Warnie, his brother and co-member of the Inklings, as having said, “‘No sound delights me more…than male laughter’ (Coren 47).”  It was among his male equals that Lewis was believed to have been most at home.

The works of each author often paralleled that of the other, though taking very different path ways.  Neither author denies the religious aspects of their own works.  However, Tolkien sought a less direct route than Lewis did with The Chronicles of Narnia and other works, and even criticized Lewis for his blatant use of allegory.  Lewis claimed that this was never the original purpose for the Narnia series.  Lewis is quoted in Martha C. Sammons’s “A Better Country:” The Worlds of Religious Fantasy and Science Fiction as saying:

Some people seem to think that I began asking how I could say something about Christianity to children; then fixed on the fairy tale as an instrument; then collected information about child-psychology and decided what age-group I’d write for; then drew up a list of basic Christian truths and hammered out “allegories” to embody them…Rather, the Christian element pushed itself in of its own accord  (Sammons 72).

Though Tolkien did criticize Lewis for his obvious use of Christianity, both men felt the same about Christianity finding its way into their works.

“Throughout his letters, Tolkien adamantly describes his work as ‘applicability’ because he disliked ‘conscious and intentional allegory’ (70).”  He is quoted as having said almost exactly the same thing that Lewis said;

“‘I am a Christian and of course what I write will be from that viewpoint (71).”

Neither author intended for their fantasy or science fiction works to be seen as a direct rewrite of the Bible.  Instead, a reader is able to see these stories through the work itself, but not with a “one-to-one relationship” between the works and the Biblical stories (73). Much like Edmund, Lewis’s path to God was not direct.

In this way, The Lion, The Witch and the Wardrobe is more of a parallel to Lewis’s life than a parallel of the Bible.

Arguably the most popular works of either Lewis or Tolkien are “fairy stories.”  Tolkien, in his essay “On Fairy-Stories,” explains that

…at no time can I remember that the enjoyment of a story was dependent on belief that such things could happen, or had happened, in “real life”.  Fairy-stories were plainly not primarily concerned with possibility, but with desirability.  If they awakened desire, satisfying it while often whetting it unbearably, they succeeded.

Both men experimented with various writing styles, but seemed to flourish in the realm of the fairy.  Lewis’s Narnia series and Tolkien’s The Lord of the Rings Trilogy are perhaps the most famous works by either author.

Tolkien believed that his creation, or “sub-creation” as he referred to it, was his way of honoring God, as his ability to write and create was given to him from God.  So, as a form of worship of God, Tolkien created languages, races and worlds.

Lewis also used this specific genre as a way to express his beliefs, though, as stated before, the allegory was not necessarily meant to match scripture or Bible stories line for line.  Though there are some seemingly direct parallels to the Bible, Lewis also used the stories of Narnia to explore other aspects of Christianity such as love, faith and even patience.

It is difficult for humans, Christians or otherwise, to wait for something or someone to enter their life, to impact it in such a profound way, especially when that something or one is never seen.  The Animals of Narnia had always known of the power of Aslan and believed that he would one day come and save them from the witch; yet none of the Animals had ever seen him, only heard rumors of him.  This kind of faith is difficult to find and is the type of faith that one strives to have.  According to R.J. Reilly, author of Romantic Religion:  A Study of Barfield, Lewis, Williams and Tolkien,

In defending romantic poetry and romantic theory they have helped to shape the climate of opinion that makes mythological fiction and mythological poetry acceptable…the fiction of Lewis and Tolkien can be taken seriously now because Shelley and Keats are once again respectable, and because the great discussion of myth and mythology are still in full swing…

Lewis’s and Tolkien’s use of the mythology they both found so fascinating helped to open, not only a study of their works, but of earlier works as well.

Lewis was Tolkien’s sounding board and escape from family difficulties, whereas Tolkien helped Lewis to come to Christianity and even served as a loose basis for the main character, Ransom, in Lewis’s first series, Out of the Silent Planet.

There is no doubt that each man had his own strengths and weaknesses unique unto themselves and to each other.  It is impossible to determine which man was the better author or which man created the largest influence.

It is possible, however, to see how each helped to shape, not only the worlds they created, but the lives in which they shared.