Outside Detail Reveals the Inner Personality in Chaucer’s General Prologue 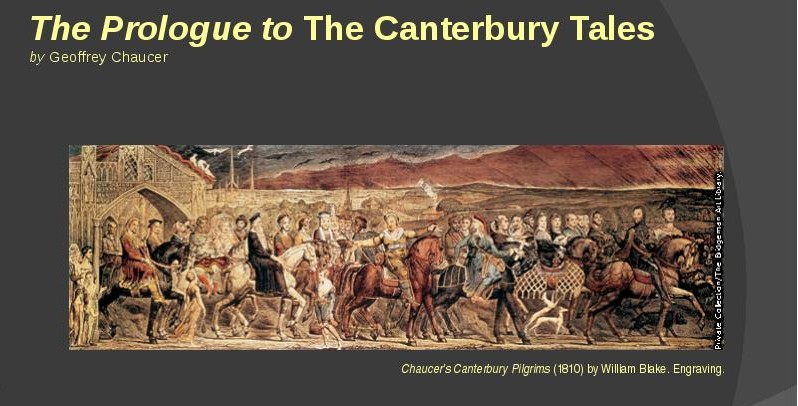 The Chaucer Pilgrim uses the General Prologue to set the scene for his reader, starting by telling the reader of the season and setting.  He begins by telling his readers of Zephirus blowing in the spring, new life growing in the fields and the birds singing in the trees.  He continues on telling how the very season sets the idea of a pilgrimage into the hearts of palmers and other people of the day.  The tale then moves into detailing each traveler making the pilgrimage that he is also making. As he wishes to make the reader aware of each in every person, he goes into great detail, telling of everything from head coverings to the ornaments worn by their horses.  The Chaucer author is using this detailing for many purposes, such as foreshadowing the types of tales they will tell and helping to develop a relationship between reader and character.  Chaucer also uses the details of his descriptions to explain the inner personality of his characters.  By describing how they appear on the outside, the reader is able to picture the true character though the narrator refers to them as worthy.

One of the first travelers the reader is introduced to is the Monk.  He is told to be a very handsome and virile man.  Though a monk’s concerns should be on the needs of the people of his parish, through the detailing of his clothes, the reader is immediately made aware of where the concerns of this particular monk lie.  His clothing is described as very lush, including “his sleves purfiled at the hond/With grys, and that the fyneste of a long” (26, l. 193-4).  He also had an elaborately made gold pin to fasten his hood sitting just below his face that looks as if it has been rubbed with oil.  The reader can also gather this from the narrator describing him as being “a lord ful fat” (l. 196-200).  This description by the Chaucer Pilgrim also includes a description of the Monk’s horse to show what kind of man the Monk is.  The reader is told that the Monk has many a fine horse and that the one he is riding has fine adornments.  “And whan he rood, men myghte his brydel heere/Gynglen in a whistlynge wynd als cleere/And eek as loude as dooth the chapel belle” (l. 169-71).  He is using this, it seems, to draw more attention to himself and the hobby he has chosen to fill the time he is supposed to be studying, learning and helping those around him.  Though the monk is unable to make time for the callings of his order and occupation such as “the reule of Seint Maure or of Seint Beneit” (l. 173), he some how managed to find plenty of time caring for himself and the horses of his stable.

One of the most descriptive characters of the tale is the Wife of Bath.  Though the narrator does refer to her as a “worthy womman” as he does most of his other characters, it becomes obvious through his description of her manner of dress, questionable behaviour, and physical appearance that is not as worthy a woman as the narrator wishes to lead the audience to believe.  While she is a generous contributor to her local church, her manner of doing so is childish.  If she is not the first to give her contribution she becomes upset and angry, and is suddenly “out of alle charitee” (30, l. 451).  Though her behaviour is unacceptable, her dress causes the reader even more concern.  The new shoes described by the Chaucer Pilgrim show mainly that she is a fairly wealthy woman.  It also shows that though she is not part of the noble class, she strives to be part of a better class than her own is considered.  It is the stockings that she wears with the new shoes, however, that cause true shock, the stockings of “fyn scarlet reed” (l. 456).  The color red is associated with sexuality, if not promiscuity, telling the reader of her sexual appetite before the narrator actually mentions her history with men.  This physical description leads the reader to be unsurprised as the description continues, telling of her five husbands “Withouten oother compaignye in youthe” (l. 461) and also indicates the fact that her tale will discuss sexuality to some degree.  Though she pretends to be a woman of the church and of high rank, the outer description given to the reader proves that she is not what she pretends to be.

Another such character that the Chaucer Pilgrim uses outer details to expose the inner self is the Pardoner.  Though the Pardoner’s hair is described as being like yellow wax in color and as hanging in chunks, he feels that is hair is one of his physical assets and does not wear a hat to cover it.  He fools himself, somehow, into believing the look to be fashionable (l. 675-83).  His face is smooth, the narrator not believing that a beard had ever been present on his face.  This is one of the reasons that the narrator, and probably the contemporary audience, believed the young man to either be a eunuch or a homosexual.  While the Wife of Bath used her wardrobe to express her sexuality, the Pardoner used his to expressed his supposed righteousness and holy mindedness.  He had pouches and wallets he carried that held several different tools of the trade.  He carried with him pig bones that he told other religious pilgrims were the bones of saints that could ward off evil and the devil.  He kept pre-signed indulgences with him as to give out when offered a “contribution” to the church.  He even went so far as “A vernycle hadde he sowed upon hi cappe” (34, l. 685) and to with him, he carried many things that he claimed to be holy artifacts, such as a pillowcase he claimed was “Oure Lady veyl” and “a gobet of the seyl/That Seint Peter hadde”(l. 694-7).  Through all of these things, the audience learns that though he is working for the church, he is not someone to be trusted.  While the narrator tries to list some good qualities of the Pardoner, such as his preaching and singing abilities, even those show the true character of the Pardoner as he uses them to gain more wealth.

The Chaucer Pilgrim does not always use this technique to describe the negative aspects of his companions’ personalities.  The first character described in The General Prologue is the Knight.  Though the narrator refers to nearly all of the other travelers as “worthy,” the description he gives of the Knight proves that he truly is a worthy and noble man.  The Chaucer Pilgrim does give a physical description of the knight, but he does speak on things such as his demeanor which was “as meeke as is a mayde” (24, l. 69).  His duty as a knight was to obey the orders of his king and protect the people of his country, and his meekness speaks to the fact that he truly cared for his status in life and understood what was expected of him.  His clothes, while sufficient, were not equal to those of the Monk.  There is no listing of different types of furs or jewelry that adorned the Knight’s apparel as there was for the Monk.  The Knight’s clothes were made of a coarse fabric and stained with rust from his chain mail (l. 75-6).  His manner of dress speaks to the fact that while he was a good and noble man, and that he served well.  Rather than look to his appearance, he came directly from a crusade to the holy pilgrimage he joined the others on.  The Chaucer Pilgrim, once again, uses the description of the traveler’s horse to speak on the person’s character.  Unlike the Monk’s horse, the Knight’s “hors were goode, but he was nat gay” (l. 74).  It was not covered with ornaments that would draw attention to him, but was all that his rank called for and all that was necessary for his travels.  The adornments of the Monk’s horse served no purpose other than to draw attention which was unnecessary for the Knight was his very personality drew attention to him.  He was a good man who served and worshiped nobly and to the best of his ability.

Chaucer uses a great many details throughout his General Prologue. He uses the outer appearance and behaviours of his characters to reflect on their inner selves.  Due to the Chaucer Pilgrim trying to find the best in each traveler, the clothing and appearance of each traveler were necessary to tell who each one truly was.  These descriptions drew both positive and negative pictures of the characters in the General Prologue, including members of the lower and middle classes.  The same does not appear to be the same, however of the noble estate.  While he uses this with all of his fully developed characters, Chaucer’s descriptions of those characters of a lower estate tended to receive more attention to detail than those of the upper estates.  This can also be said for his description of the satirical characters versus the characters that are to be thought of as ideal.  While the color of the Knight’s hair is not even mention, the reader knows details down to the “Gat-tothed” appearance of the Wife of Bath.  He seems to need these physical attributes to use to his satirical tales, while those of details are unnecessary for the nobility for the very fact that they are nobility.