Note:  I originally had a point to this post, but, somewhere along the line, I forgot what it was and it was just too cathartic to stop writing. 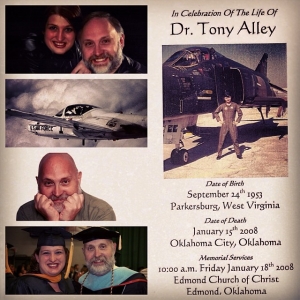 Six years ago today, my father died of brain cancer.

This was the first true loss that I’d ever experienced.  I’d lost grandparents and great parents, but I was either too young to fully remember or wasn’t close enough to them for it have made a major impact.

I’d studied grief before, however, and had even worked with kids suffering from loss.  I’d read about Kübler-Ross’ 5 stages of grief, I knew what emotions were “normal” and expected.

Experience is never the same as study.

My dad was diagnosed with brain cancer the week of Christmas 2006.  He had his first surgery on Christmas Eve.

The time of his illness is all lost in a haze.  I only remember bits and pieces of that time.

I remember he had a second surgery, went through chemo and had gamma knife surgery, none of which made any difference.

I remember he continued to teach up until he just physical couldn’t do it any longer.  And I remember how dedicated he was to his students and they to him, often finding groups of them coming to visit.

I remember how mad he was when the doctors took away his drivers license, meaning he had to get rid of the sports car he loved.

I remember that he was sweet and kind an inspirational to everyone who came to see him.  And I remember how hateful and cruel he could be to me and my mom.

Apparently, lashing out at their primary caretakers, especially when the caretakers are loved ones, is common with terminal patients, something I didn’t learn in school.

Maybe they do this as a way to make their death easier on us in the end, maybe because they know, no matter what they say or do, we’ll still love them, so they feel free to take out their hurt and fear on us, I don’t know.

Thirteen months after his first surgery, in January of 2008, my dad was in hospice for his final days. 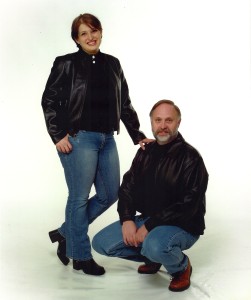 Now, I’m not really what you could call a “Daddy’s Girl,” I just have too much of an independent spirit for that.  Dad and I were close, though.  I have his personality and I look more like an Alley than I do a Holsey (my mom’s side of the family).

I’ve always teased my parents, saying that they played favorites.  And, while I know they loved my brother and I equally, my mom and brother always understood each other best (they have matching personalities) and no one understood me like my dad.

After my dad had been in hospice for a couple of days, Mom had a talk with me.  She told me that she thought my dad was ready to go, but couldn’t until he knew I would be okay.

So the next night, after work, I went to visit with him as I did every day.  When I got there, many people were visiting.  My dad was a Deacon at the church and a professor at Oklahoma Christian University.  Well-known and well-liked by many people, he always had a steady stream of visitors.

I asked for a private moment with Dad and, when the room was empty, I knelt down by his bed.  I held his hand and told him that I loved him.  He told me that he loved me too.

That’s not how I felt though.  I held it back, but what I really wanted to tell him was to keep holding on, to keep fighting, because I couldn’t stand the thought of not having him in my life.

I told him again that I loved him.  He told me that he love me too.  At this point, I could tell he wasn’t really with me anymore mentally, and as soon as my mom came back, I took off.  I turned tail and ran.  I don’t know where.  I don’t honestly remember.

Dad died the next morning.  His final words, the “I love you” he’d said to me the night before.

This isn’t a memory I like to think about or talk about or would wish on my worst enemy.  It isn’t even really the memory I’d intended to write about, though I won’t deny that it feels good to have put it out there so I can let it go. 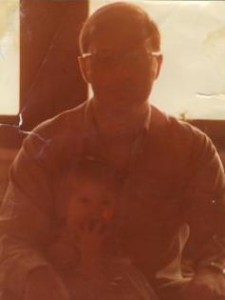 I’d studied the 5 stages of grief before and now I experienced them on a personal level.

What I’d read and been taught was that these stages don’t necessarily occur in a certain order and you can experience multiple stages at the same time.  And I did.  Repeatedly.

I’d feel like I was beyond the anger stage, into depression and then maybe even having reached acceptance, when all of the sudden, the anger would hit me again.  It felt like it would never end.  Six years after his death, it still hasn’t ended.

The wound isn’t as raw as it was six years ago, but it isn’t healed either.  And I’m pretty sure it never will be.

Back in May 2013, I went to see a movie with some friends from work, Star Trek Into Darkness.

As I was walking into the theater, it occurred to me that Dad was a huge Star Trek fan and he’d have loved to see this movie.  I was fine, it was just a random thought.

We sat down and were waiting for it to start, I realized that it was Father’s Day weekend.  Again, it was just a realization, I wasn’t upset by the thought.

The movie starts and I soon realize that (**SPOILER ALERT**) this movie is a twist on Star Trek II:  The Wrath of Khan.  Of all the Star Trek movies, The Wrath of Khan was in my dad’s top 5, if not his #1 favorite.  Still, I was fine, no problems whatsoever.

I say goodnight to my friends after the movie, walk out to my, car then decide to call my mom.

Me (thinking):  I’m just calling to see how she’s doing!

5 1/2 years after his death, I go to see a movie and end up crying as hard as I did the day that he died.

That, that is what is so difficult about grief.  Being blindsided by memories and pain…

If I’m going somewhere or doing something that I know will remind me of my dad, I can prepare myself. 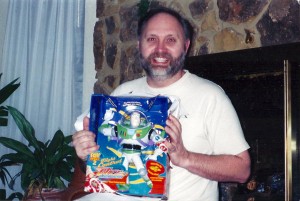 But there are just some situations you cannot prepare yourself for.  Those are the moments that hurt the most.

My dad was an amazing, caring, loving father.  He could also be selfish, impatient and cantankerous.  And at first, it was those negative things about him I remembered the most.  Maybe focusing on the negative aspects of his personality was easier for me to deal with the pain of losing him.

6 years later, I’m able to think about both the good and the bad.  I’m able to both miss him and just to be thankful for the time I had with him.

It doesn’t hurt any less, but the pain isn’t as sharp.